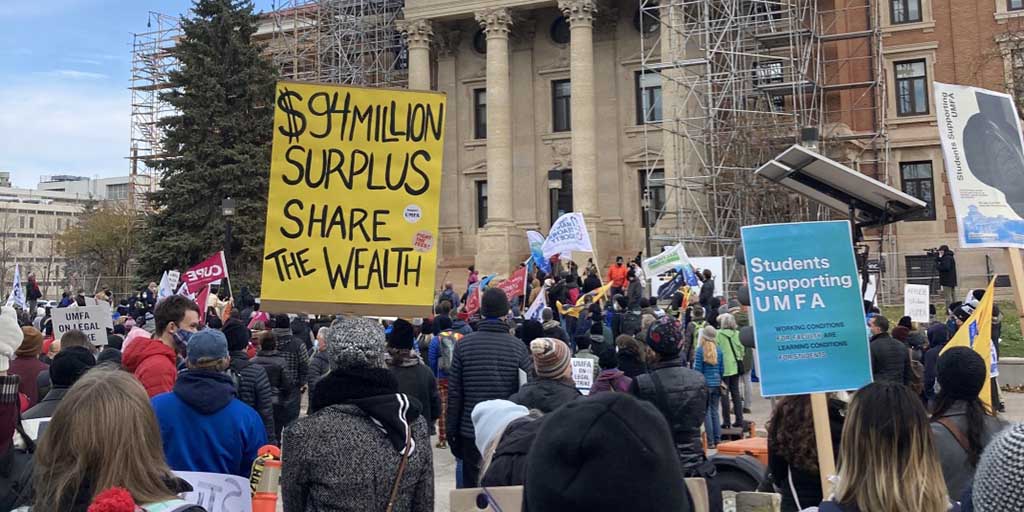 Previously published in The Manitoban November 17, 2021

Two weeks ago professors, instructors and librarians represented by the University of Manitoba Faculty Association went on legal strike, bringing many classes and other university activities to a halt.  The main issue faculty are fighting against is deteriorating institutional quality due to uncompetitive salaries.

The U of M has the lowest paid English-language university faculty amongst its peers, and has seen its inflation adjusted salaries fall by 1.7% over the last six years, while faculty at other research-intensive universities in Canada saw a 2.6% gain.  Low compensation is stifling recruitment of new talent, with unfilled positions leading to a deterioration in ability to prepare the next generation of Manitoba for the workforce. Required courses are being left unstaffed and not offered, delaying students in meeting degree requirements, who are looking to out-of-province universities for courses.  Leading faculty are heading to other provinces, taking their large research grants and jobs for students with them. University administration acknowledges these negative impacts of uncompetitive pay, and has the money to resolve the issue, but appears caught up in the broader ideological dictates of the Manitoba government.

Since being elected in 2016, the PC government has been on a mission to shrink the size of the government. Over-achieving on even their own ambitious targets, the Pallister government cut the provincial civil service by 18 percent or 2,644 positions from 2016 to 2021, more than double the target initially announced. Those who remained faced years of real wage reductions in alignment with the wage freeze mandate of the government. These cuts were supposedly to address the budget deficit, but in reality have ended up paying for large tax cuts that disproportionally benefit the wealthy and continue to divert funds from essential health, education and other government services.

After five years of this austerity approach, the consequences have been broadly felt. The most visible have been in health care with the closure of emergency rooms and clinics, rock-bottom staff moral and mental health, and staffing shortages. When the pandemic hit this weakened system, Manitoba had the distinction of being the only province at the time to send intensive care patients out-of-province due to lack of capacity (Alberta eventually became the second member of this disreputable club after an ill-advised and premature removal of public health restrictions).   Recruitment and retention issues persist. Ironically, the government recently asked the University of Manitoba to train more nurses, with faculty unable to respond to the province’s “rush job” due to staffing shortages linked back to provincial austerity.

Problems with recruitment, retention and quality of public service is not only apparent in health and education. The Manitoba government is facing large vacancies in the conservation sector, unable to retain officers to protect our province’s natural resources and recreation areas central to tourism across the province. Infrastructure workers are reporting that deep cuts and low wages are compromising the quality of our highways, bridges and other assets, threatening public safety and our large transportation industry. Staff shortages at the Vital Statistics Agency are resulting in Manitobans waiting months for death, marriage and birth certificates, leading to painful and costly delays. Public health inspectors are facing large backlogs due to staffing shortages and low wages, a problem magnified by the COVID-19 crisis. Vacancy rates are not generally made public, but indications are that rates are extremely high: Freedom of Information requests have found them well in excess of 20% in the departments of Family Services, Justice, and in the occupations of health care aides and home care workers.   At a time when a strong public sector is needed to support the province’s social and economic recovery from the COVID-19 crisis, the public sector appears be suffering a severe capability crisis due to understaffing.

Despite old-school perspectives that pit government versus the private sector, the reality is that a modern advanced economy needs a stable, functioning and well-staffed government to help coordinate economic development and provide essential health, education and other social services. Without strong public services, Manitoba will lose ground to other jurisdictions with respect to developing, attracting and keeping skilled workers and businesses in the province.

The strike currently taking place at the University of Manitoba is only the most recent symptom of the government’s austerity agenda, and is making matters worse. If labour market tightness is the problem Manitoba’s new Premier asserted during her leadership campaign, we should be investing more in our post-secondary institutions and doing more to support students to move through their programs and get on the job market. Instead, due to the real wage reduction mandate from the government to the University of Manitoba, the strike has students nervously waiting to see if they will be able to complete their classes this term and grappling with the impact this will have on graduation timelines, including in high-demand occupations such as nursing.

A new Premier, along with the associated changes in senior staffing at the provincial government level, is an opportunity for a reset, a chance to reverse the cuts, end the hostility towards workers, and reinvest in the public services that underpin our economic success and quality of life. A good first step would be to clearly state that the University is free to negotiate wage increases with its workers based on the needs of the institution and its stakeholders, instead of anti-public sector bias.

Jesse Hajer is assistant professor in Economics and Labour Studies at the University of Manitoba and a research associate with the Canadian Centre for Policy Alternatives - Manitoba. He worked as a policy advisor and manager with the Manitoba Government from 2009-2016.