Premier’s Labour Legislation Changes Yet Another Attack on Working Manitobans 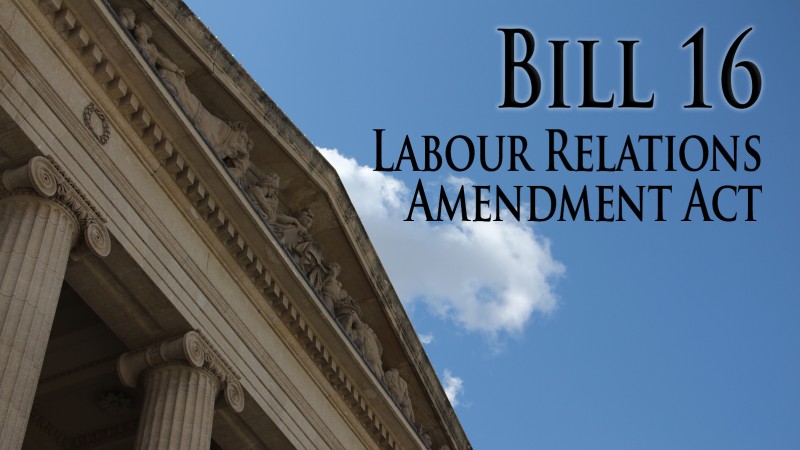 The Pallister Government’s time in office has been hard for Manitoba public-sector workers and their families. They’ve seen their wages frozen, colleagues laid off, good jobs contracted out, quality public services eroded and privatized – all while hearing the Premier publicly denigrate their contributions. It’s been the worst of times for many Manitobans.

Earlier this year, when a Manitoba court struck down the “draconian” wage-freeze law (Bill 28) that the Premier imposed on public-sector workers, there was a sliver of hope that fairness would win the day. But the government appealed that court decision, and now they have introduced new draconian legislation that further erodes the rights of all workers.

If you haven't been able to follow the proceedings at the legislature closely, Bill 16, the Labour Relations Amendment Act, makes several changes to existing laws that include:

These amendments will lead to more strikes and lockouts and prolong labour disputes in our province. Manitoba currently has a fair and reasonable process in place. If a strike or lockout lasts 60 days, a neutral arbitrator is brought in to settle the dispute and reach an agreement.

The right to arbitration has provided employers and workers with certainty around labour disputes for a long time, and it has served our province well. Manitoba has had the lowest rate of days lost to strikes or lockouts in the country over the last decade. But this isn’t about finding solutions; it’s about punishing unionized workers and emboldening employers who won’t negotiate fairly or refuse to come to the table.

And at a time when workers are under intense pressures due to the pandemic, many are standing up and saying they deserve to be treated with respect in the workplace. Rather than supporting workers, this legislation makes it easier for hostile employers to fire employees who make the difficult decision to improve their working conditions by going on strike.

Bill 16 also attempts to force unions to disclose financial information to the public. The truth is unions are already accountable to their membership and there are already rules in place requiring them to disclose financial information about their operations. But again, this isn’t about solving a problem, this is about making life more difficult for unions and their members.

And finally, in a move that further tips the scales in favour of employers who want to get rid of worker protections, the threshold to hold a union decertification vote has been lowered to less than 50%. This bill is all about attacking workers and unions, and it comes on the heels of the Pallister government making it harder for Manitobans to join a union by signing a union card.

Manitobans are hard-working people who believe in fairness and value the ability to work together to build a stronger province. Unfortunately, this legislation clearly underscores just how out of touch the Premier is with working families and how little respect he has for the average worker.


Help Fight back against Bill 16

If you haven’t already signed the MFL petition against Bill 16, please sign now. Let’s tell the Premier that now is the time to support working Manitobans, not attack them.