Now, more than ever, we must stand together 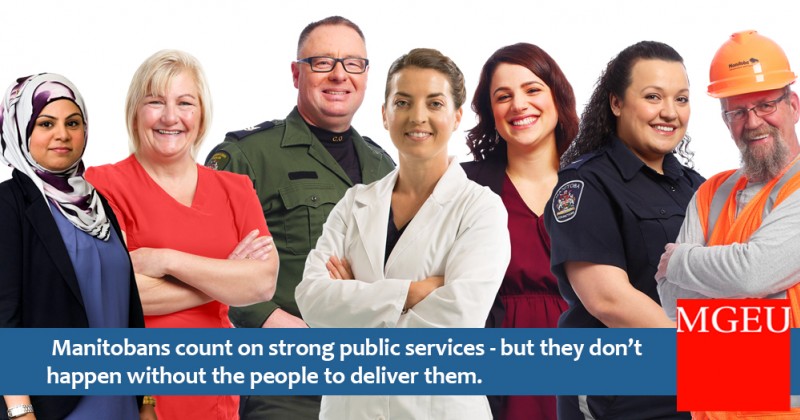 We have heard from many MGEU members and I know the stress and fear that so many are feeling right now.

The Premier’s proposed service cuts and workforce reduction schemes have created much uncertainty and left hard working members feeling everything from anxiety to anger.

This week, a number of experts in our province, from all backgrounds and political stripes, have publicly suggested better options, instead of austerity, to get Manitoba through these troubled times. It seems as though everyone — with the exception of the Premier — agrees that service cuts and more layoffs at this time will only succeed in prolonging a recession and could well send us spiraling into a deep economic depression.

Will the Premier listen to community leaders, experts, and everyday Manitobans? It’s hard to tell, but if this week was any indication, it’s likely the answer to that important question is, sadly, “no.”

He has continued to tell the media this week that he wants all “non-essential” civil servants to sign on to a work share agreement that isn’t even allowed under current federal rules, while also threatening layoffs. This Premier seems intent on ignoring sound advice and imposing his way, no matter who gets hurt.

In order to minimize the impact on members, we have continued to engage with government officials to discuss a variety of options.

Our representatives met with government officials today and asked, once again, if they could provide details about who would be deemed “non-essential” in their work share scheme? They had no additional details for us.

Given the lack of even the most basic information about the government's proposals, we are left to wonder if they don’t want anyone to know the details of their plan, or if they simply still have no idea what their proposed plan will look like. Either way, this lack of basic information is not reassuring for workers or the Manitobans who rely on the services that our members provide.

During today’s meeting, government expressed interest in our proposal that they seek opportunities for redeployment of employees to the areas of greatest need in the fight against COVID-19. We again expressed our willingness to work with them in facilitating redeployment opportunities wherever possible. We see this as a far better option than the Premier’s threatened layoffs.

We will continue to press provincial officials to share more details on their proposals. Members deserve to know what they are being asked to consider.

In these difficult times, we must remain unified as Manitobans, and as MGEU members. The Premier is trying to use this pandemic to drive a wedge between Manitobans, between the private and public sector, and even among public sector workers. He is trying to get what he wants by dividing Manitobans and we cannot let that happen.

When the Coronavirus pandemic hit, Manitobans agreed that we needed to stick together to fight the virus. So far, Manitobans have done a pretty good job of fighting the virus and flattening the curve.

Now with the Premier attacking public services, it is important, more than ever, that we as MGEU members continue to stand together.