This Public Services Week we Celebrate and Fight for our Services 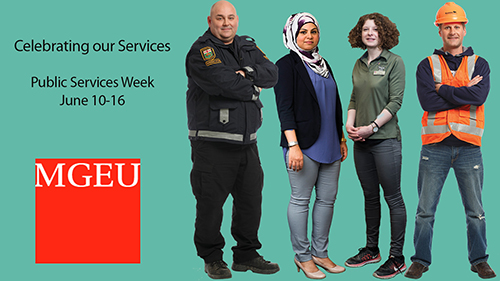 Prior to being elected as Premier of Manitoba, Brian Pallister pledged that front-line public services and the people who provide them would not face any cuts or reductions. But in the two years since that election, what we’ve seen is a continuous erosion of our public services.

Some cuts have received significant attention in the media and a great deal of public backlash, like the closing of the Winnipeg ERs. Others have received less focus from the media, like the privatization of the Pineland Forest Nursery.

Over the last several months, we’ve seen more of these “quiet” cuts (or at least the government has tried to keep them that way) from the Pallister government. Many of these cuts have been in rural Manitoba, like the closure of the Department of Families Office in Killarney, and they seem to be aimed at reducing front line services that the government feels will cause little resistance from voters.

This must have been the plan when the government quietly made the announcement that they were considering closing highway rest areas, including the Pinegrove Rest Area on the Trans Canada highway.

At first, the Infrastructure Minister insisted when talking to the media that people preferred to use gas stations to take a highway break and he encouraged more Manitobans to do just that once Pinegrove was closed. But when a petition started to gather steam and when the plan was met with swift opposition on social media and from critics, including our union, the government soon realized that they couldn’t downplay this cut much longer. Caving to public pressure, the government agreed to reverse its poor decision and promised to keep the rest stop open.

It’s clear in this case that they misjudged Manitobans. They failed to recognize just how important public services are to the people of our province. Perhaps they misjudged that decision because they had made other similar cuts and received far less public resistance in return. Whatever the reason, it’s clear that we can get the government’s attention if we are willing to stand up and fight for our services.

This week we celebrate Public Services Week, an important time for us to reflect on what is important to us as Manitobans. Public health care, education, infrastructure, health and safety, child care, affordable housing, environmental and drinking water protection: there are so many ways our public services help us maintain the quality of life we enjoy as Manitobans. Whether they’re big or small, cuts to our public services threaten our quality of life.

Here are just some of the front-line service cuts we’ve seen over the past two years that will have an impact on Manitobans and the MGEU members who deliver them:

These are just examples and the list continues to grow every month. No matter the cut, big or small, they all add up to significant cuts to our quality of life. Unfortunately, these cuts are happening with such regularity that it’s easy to see how the average Manitoban could lose track of the services that are gone after just a few weeks.

That is why it is important – now more than ever – that we celebrate our services this Public Services Week and that is why we must continue to hold the government accountable for cuts as we fight to keep our public services public.

To all of our 40,000+ MGEU members throughout the province, I thank you for the services you continue to provide and I wish you a happy Public Services Week.