Manitoba Falls Behind on Minimum Wage 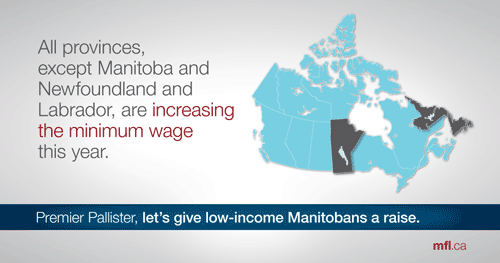 Manitoba is one of only two provinces in Canada that will not raise its minimum wage this year, despite the fact that the cost of living keeps rising. At a time when so many people and organizations in our province are standing together to call for a living wage, Manitoba stands with Newfoundland and Labrador in denying a raise to working families.

In a recent open letter to the Manitoba Premier, Manitoba Federation of Labour (MFL) President, Kevin Rebeck along with 60 community, labour and non-profit organizations called on the premier to do the right thing and increase the minimum wage. The MGEU is a proud signatory to this letter, and I encourage all MGEU members to join the call for our Provincial Government to extend a hand to working families in our community.

It was encouraging to see Growth, Enterprise and Trade Minister, Cliff Cullen appear to listen to this call to action. On September 29, the minister issued a press release saying they are looking for feedback on minimum wage.  (The full press release can be found here.)

We all know groceries, rent, and utilities are more expensive, and we know that families who rely on minimum wage jobs to make ends meet will have to find the money some other way or deny themselves basic necessities. More often than we may realize, when we talk about minimum wage, it’s not teenagers working after school jobs, it’s parents trying to raise their families. Research from the MFL shows that 60 percent of Manitoba’s minimum wage earners are women, many of whom have children.

Please support the fight for an increase in minimum wage, because we all know someone struggling to get by. Visit mfl.ca/minimumwage to view the open letter and participate in spreading the word on social media.