Manitoba government’s austerity agenda makes it an outlier in Canada 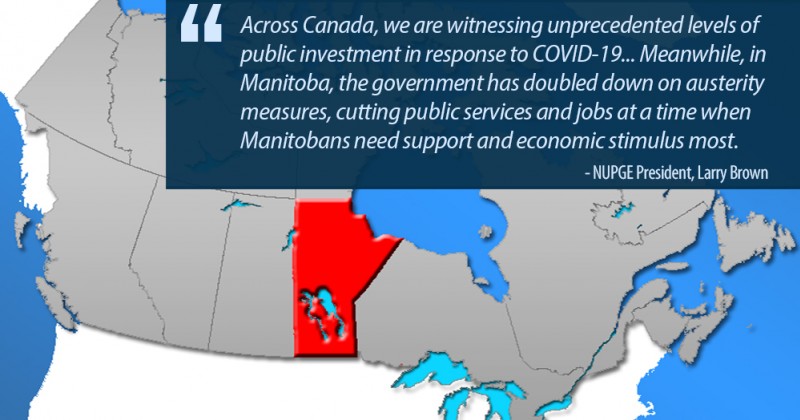 Across Canada, we are witnessing unprecedented levels of public investment in response to COVID-19. The federal government has unveiled an economic stimulus package, the scale of which hasn’t been seen in generations. And at the provincial level, governments are injecting huge sums into their economies to protect jobs, help hard-hit sectors, and support vulnerable populations disproportionately impacted by this crisis.

Even some Conservative government’s like Doug Ford in Ontario are following a road map that calls for investment over cuts, in order to protect our economies.

Meanwhile, in Manitoba, the government has doubled down on austerity measures, cutting public services and jobs at a time when Manitobans need support and economic stimulus most. This short-sighted approach threatens to jeopardize the future health of Manitoba’s economy and its people.

By comparison, the Manitoba government has been woefully inactive, failing to offer meaningful support to workers, families, and small businesses. For example, the Province has ignored calls for paid sick time for all workers, rental assistance, and income supports, especially for those living on income assistance.

Numerous local commentators and experts have exposed the failures of the austerity approach. In a recent article, policy experts from the CCPA (Manitoba) outline why the Manitoba government response is entirely at odds with standard economic theory. Economists have pointed to lessons from history that show increased spending, not government cuts, is the way through this pandemic. CCPA's calculations reveal that the Manitoba government is employing questionable economics at best, or fear mongering at worst.

Even conservative voices, like Shiu-Yik Au – an assistant professor at the University of Manitoba's Asper School of Business, and Manitoba Progressive Conservative Party member — have challenged this thinking, noting that austerity measures could trigger a further economic slump. In a recent opinion piece, he noted that a provincial budget is not the same as a household budget: “every dollar that the province saves is a dollar (or more) that someone else in the province will not earn.”

He warns that Manitoba should avoid, “the dangerous short-term path of austerity and cutbacks, as this will only lead to greater economic problems.” Instead, as most economists agree, he suggests the Manitoba government should spend more to help our most vulnerable during this pandemic: the sick, the elderly, the poor and our brave essential workers.

Such economic analyses raise concerns about how Manitoba will get through the present crisis, but also about how it will fare afterwards.

The proposed austerity measures will hurt Manitoba’s workers, service providers and users, and businesses today. But they will also hinder the province’s ability to recover from the crisis. The critical services that are on the chopping block, and the workers who keep them running, will be needed once the restrictions are lifted, and perhaps more than ever.

Our provincial government’s preoccupation with the provincial deficit is myopic, and it threatens to destabilize Manitoba’s economy in the long term. The government is prepared to starve its own public institutions at a time when it should be bolstering them and supporting the economy in ways that will make it more resilient after the crisis.

The COVID-19 pandemic has reinforced the value of our public and social services, fair wages and benefits for all workers, of protecting our society's most vulnerable, and eliminating inequities. Now is the time to invest in them.

But Manitoba has chosen a different path, one that makes the province an outlier in the country, and it is Manitobans who will unfortunately pay for this short-sightedness.