Shopping Around for Air Services a Risky Proposition 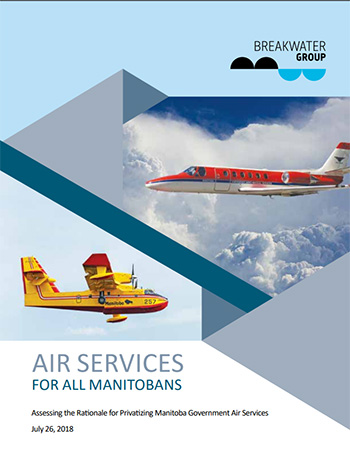 The following column appeared in the August 17, 2018 edition of the Winnipeg Free Press. The authors also wrote the report entitled Air Services for All Manitobans: Assessing the Rationale for Privatizing Manitoba Government Air Services, which was commissioned by the MGEU.

Since coming to power in 2016, Manitoba’s Progressive Conservative government has moved to privatize a number of services, including home care, road and bridge maintenance and public housing. The target of the government’s most recent privatization is Manitoba Government Air Services, which includes its air firefighting fleet, air ambulance and general transport services for Manitoba Hydro and other government entities.

This isn’t the first time the government has looked at privatizing parts of the air service. In 1992, a task force under the Filmon government examined contracting out emergency air ambulance service but chose to keep it a public service. For the current minister in charge of air services, exploring privatization is about cost savings, or "smart shopping."

However, the minister has made a strong commitment to ensuring that the quality of these life-saving services is the same as or better than the current public model before signing a deal with a private firm.

In a recent study conducted for the Manitoba Government and General Employees’ Union, we examine the potential effect of privatization on these essential services.

Our research shows that the government will be hard-pressed to achieve cost savings without compromising the high standard of service. Challenges around service quality, working conditions and responsiveness often arise when the government gives up control over these types of services. The ongoing costs of privatization can also be very high and will require the government to develop new ways to monitor and regulate for-profit private companies and ensure public needs and expectations are met.

Our analysis reveals that privatization would likely negatively impact patient care. If services are privatized, the emergency air ambulance jet service for many remote communities would likely be replaced with more rudimentary, slower turboprop aircraft, leading to compromised service.

This would mean a patient being transported from a remote community would take up to two hours longer to get to Winnipeg in a slower, more turbulent and noisy aircraft. This time is critical when treating seriously ill patients who have suffered a stroke, heart attack or other life-threatening condition.

These pilots are highly experienced, have developed innovative new technologies, and train pilots from other provinces and countries. This high standard for training and experience has led to Manitoba having a near-perfect safety record with no serious injuries or fatalities.

The decision to lease out the air firefighting fleet to a private company also raises questions of protection outside of Manitoba’s forest fire season.

These risks raise the question as to why the province is proceeding with this proposal to privatize a service that has served Manitobans well. The province already has a model that builds on the strengths of both public and private delivery.

It is in these areas where cost-effective, high-quality service is more challenging to obtain from private companies. Unfortunately, due to austerity measures and the resulting staff vacancies at government air services, Manitoba is already relying more and more on these costly private replacements.

In the end, privatization of these services is a risky proposition, especially given that the current model appears to be a balanced approach and is performing well. The minister himself has said they are getting "very good service right now" and that they are just being smart shoppers. Unfortunately for the minister and Manitobans, "shopping around" does have costs.

The government’s "shopping around" has required the hiring of external privatization consultants and has been blamed for worsening staff shortages and more government aircraft being grounded.

It is undermining the province’s main competitive advantage: a dedicated workforce that we found is proud to serve in the public interest safeguarding Manitobans.

While it is not too late to reverse course and adequately staff the public model, privatization once completed will be very difficult to undo, if things do not go as planned.

This should also weigh heavily in the government’s final decision.

Jesse Hajer teaches economics and labour studies and Jennifer Keith is a PhD candidate with the native studies department at the University of Manitoba. Both are members of Breakwater Group, a consulting co-operative focusing on public policy research and project management based in Winnipeg.