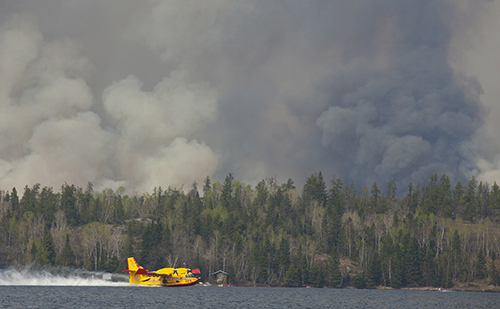 A provincial water bomber battles the 2016 Caddy Lake blaze. Dry conditions and an elevated fire risk throughout many parts of Manitoba this spring remind us just how vital this essential, lifesaving service is to Manitobans.

The Manitoba government recently made a baffling announcement about our Air Services branch, which transports critically ill patients to hospital and protects our communities from forest fires.

They said they will be hiring a private consultant to look into how they might auction off our Air Services branch (including Manitoba’s valuable fleet of specialized aircraft) to a private airline company.

Why? you may ask. That’s a very good question.

We are a province of one major city, and dozens upon dozens of rural and remote communities. Every summer (and sometimes earlier, as we’re seeing in 2018), our precious forests run the risk of becoming tinder boxes that threaten property and lives.

As a result, our Government Air Services have provided an essential service to Manitobans for the past 86 years. They work day and night to ensure our LifeFlight air ambulances and provincial water bombers are there for us when we need them. They’re on the job because it’s a matter of life or death.

They are the kind of essential public service that, according to a recent Probe Research poll, 72% of Manitobans say should remain public, with a focus on the needs of Manitobans, not the bottom line of a profit-driven company. Unfortunately, we’ve seen time and time again, other government jurisdictions pay the high price for prioritizing shareholders and personal business gains over public safety.

A 2013 medical review in Ontario found that operational issues at the for-profit helicopter EMS program run by ORNGE was found to have contributed to the deaths of up to eight patients. The operational issues included a delay in launching an aircraft, and a flawed design of an aircraft and the equipment used by the medical crew.

Pilots who have worked for both the public branch and private companies are concerned about privatizing our Air Services. Too often, private companies, who must worry about generating profits for shareholders, have little choice but to sacrifice service. In the case of Air Services, cutting corners can end up in tragedy.

So why then? Why risk it?

So far, the government has not provided a single piece of evidence to justify spending our taxes on a private consultant to pursue private options for delivering an essential public service.

Maybe that’s because our Air Services branch not only keeps the safety of Manitobans ― especially those in remote communities ― front and centre; it also delivers a public service for tremendous value for our dollar.

Manitoba Health completed a feasibility study in 2009 to determine if a helicopter EMS program should have been provided publicly or privately. The cost of the public model ― including buying a helicopter, paying interest, medical crews, flight crews, insurance, fuel and maintenance ― would have added up to between 4.8 and 5.1 million dollars. In 2012, the province contracted the program to a private provider for 10.2 million dollars, or double the cost. Important lessons can be learned from this experience.

The Premier has said before that be believes the private sector always delivers a superior service. We know this simply isn’t true. But if the Premier is clouded by ideology, if he has already made up his mind on privatization, before a consultant is even hired or before he or a Minister have talked to a single frontline worker, it would be disastrous for Manitobans.

Our members working in Air Services are very busy right now fighting fires, as dry conditions and an elevated fire risk persist throughout many parts of the province. It’s times like these when we are reminded just how vital this essential, lifesaving service is to our province.

If given the opportunity, the workers who deliver this lifesaving service would tell the Premier and the Minister that there’s a serious pilot shortage in Canada. Despite this shortage, these dedicated professionals say there is no other place they’d rather work. They take immeasurable pride in what they do – protecting Manitobans and providing this public service is their calling.

They would also tell the Premier that keeping Air Services public is the best of both worlds – providing excellent value with a proven safety record. Investing in a proven, effective lifesaving service is a far better use of scarce taxpayer dollars than hiring consultants to tell the government what they may already want to hear.