The Season that Brings out the Best in Us 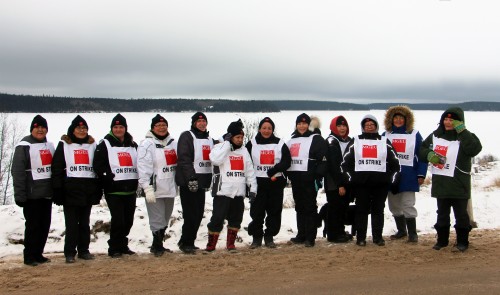 Our members of Local 367, Nisichawayasihk Personal Care Home, may have walked in bone-chilling temperatures, but the reaction from the labour community to their situation was heart-warming.

The holiday season has always been my favourite time of the year because it truly brings out the best in people – whether it’s volunteering to help those less fortunate than ourselves or donating food or clothes to a charity to help make the season a bit happier for those in need.

This is a time when we hopefully get the chance to spend some much-needed time with friends and family. I say ‘hopefully’ because, as we all know, public services never take a break.

So, while many offices are closed, while the legislature is not sitting, while many hard-working Manitobans celebrate their holiday traditions with the ones they love, thousands of MGEU members will be working around the clock to continue to deliver the vital public services we rely on.

2016 was an extremely busy year for the MGEU and I am so proud, once again, to have been elected to serve our members of this great union. As we near the end of 2016 I believe in many ways that this year will be remembered as a turning point for the MGEU, particularly in light of the fact that we are dealing with a new government that seems poised to make cuts to public services.

This year, after prolonged negotiations and numerous province-wide rallies and campaigns, our Civil Service members managed to reach and ratify a new five-year contract. And with many meetings, late-night bargaining sessions and pickets, we were also able to reach agreements for over 60 other different MGEU Locals.

Unfortunately, not all agreements could be reached without job action. This past summer, Local 221 (Macdonald Youth Services Crisis Stabilization) members were left with no choice but to become the first MGEU Local in more than 15 years to go on strike. We’re still seeking a resolution for them.

This month we marched on a picket line once again, this time for our members of Local 367 (Nisichawayasihk Personal Care Home) in Nelson House, who went on strike because they earn significantly less than other Manitoba workers who have the same training and do the same job.

Fortunately, the strike has ended – their employer provided an offer that begins to address the wage disparity as we work with them to eventually close the gap entirely.

These members of Nisichawayasihk walked in bone-chilling temperatures but the reaction I saw to their situation was heart-warming. Our MGEU staff and members across the province pulled together donations of warm winter clothing and money for the striking families, while those in the labour community also stepped up in a big way to show their support.

In all, $3,285 was raised to help brighten the holiday season for these families. Thank you to the Thompson Labour Council, USW Local 6166, CSU Manitoba Solidarity Fund/CUPE Manitoba Regional Office, CUPW Local 839, ACTE 1725, and Unifor 191 for your donations. Also, a big thanks to the members of USW and MLA Tom Lindsay, who joined us on the picket line. Your support, kindness, and generosity, particularly at this time of year, was yet another reminder of what makes our union and our labour community here in Manitoba so special.

Have a very happy and healthy holiday season.  Stay safe out there.