Bill 7 is a Step Backwards for Working Manitobans 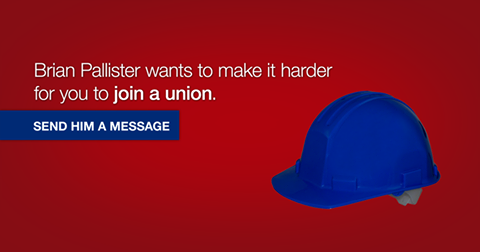 This week I spoke to a Legislative Committee about Bill 7, the Labour Relations Act, which will upset the current balance we enjoy in this province when workers wish to certify to join a union. Unfortunately, Bill 7 upsets this balance by giving more power to the employer and making it harder for workers to join a union by taking away the ability to automatically certify.

The current process for union certification is one that has been in place for over 15 years. As it currently stands, if 65 percent of employees in a workplace sign union cards, they are automatically certified. If the 65 percent threshold isn’t reached (between 40 and 64 percent), a secret ballot vote is held.

The problems with providing only secret ballot certification

Proposed changes to the legislation mandate that a secret vote be taken in ALL cases – even when two-thirds of workers have already indicated their choice by signing a union card. Mandating workplaces to hold a secret ballot vote is taking a step backwards, and devotes time and resources to fix a system that doesn’t need fixing.

I was employed in a unionized workplace for over 30 years. While the pay wasn’t great, it was enough, when combined with decent benefits, to help raise four healthy children with clothes on their backs and food in the fridge. Looking back, it’s clear that belonging to a union helped give us a solid footing that all Manitoba families deserve.

Manitobans are hard-working people and we know the value of safe workplaces, work-life balance, health benefits and good pay. We also know what fair and balanced laws mean for employers and employees. Manitoba has a history of stable labour relations with few strikes and lockouts. This is why the proposed changes in Bill 7 are concerning.

It’s been shown that forcing workers who want to belong to a union to vote, after they have already signed up to be part of a union, leads to a decline in union density. Is this perhaps the goal of the legislation? Forcing workers to vote on union certification after they have already indicated their decision, allows the employer time to obstruct their choice through intimidation, coercion and other techniques. Employer intimidation still exists, and this bill will only strengthen the employer’s ability to enable this behavior.

Presentations at this committee continue this week. At last check, 46 presenters were registered. Manitobans and organized labour have lots to say about this proposed change. Let’s hope the government is listening carefully before they move forward.