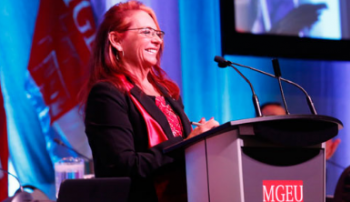 Thank you to all delegates who helped to make MGEU Convention 2016 such a success. We’ve already begun implementing the resolutions and recommendations we heard from the membership last weekend, and I know we’re going to be a stronger union because of the discussions and debate.

Obviously I am overjoyed to have been re-elected to a third term as MGEU President, and look forward to the many opportunities I will have to work together in solidarity with members over the next two years to move our union forward. It was gratifying to see so many activists, who have been steadfast in their support of their union over the years, return again as delegates to Convention to contribute in such positive ways, but it was equally energizing to know we had 160 people, or 44% of the floor, sitting as new delegates to our Convention. This certainly bodes well for the future of the union that new people, with new ideas and strategies, have taken the step in getting involved in their union.

I believe in many ways MGEU Convention 2016 will be remembered as a turning point for our union, particularly in light of the fact that we are dealing with a new government that seems poised to make cuts to public services. So from Convention we emerge with a renewed purpose: protect public services as well as the people who provide them and to speak out on the need to keep public services public.

The theme of our ongoing ad campaign and 2016 Convention – Keep Us Together – has never been more appropriate. In times like these, we must keep talking about the importance of keeping Manitobans together with the public services that they value and that they deserve,  about keeping our public service system intact rather than stripping it away piece by piece, and about all Manitobans working together to stand up for safe and respectful workplaces and strong communities.

Our members clearly understand investing in public services and good jobs contributes mightily to strengthening our communities. They see the value every day. We know Manitobans support us in our standing up, standing strong, to protect public services because they’ve said so in public opinion poll after poll. It’s their #1 priority. We’re going to continue to bring our message to government, at every opportunity, to remind them of their election commitment: to protect and improve public services and the people who provide them.

Thanks again, MGEU members. Looking forward to the next two years with you.