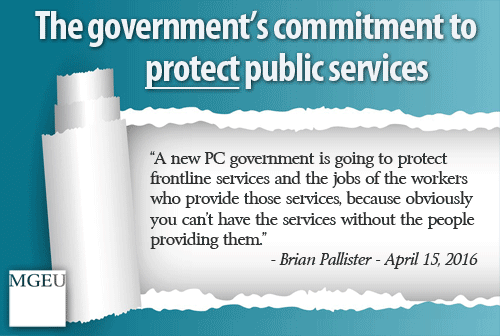 When the Manitoba Government made a commitment during the recent election campaign that they would protect public services and the people who provide them, voters trusted that they would be true to their word and live up to that pledge.

Knowing that Manitobans value services above all else, they didn’t say “we’ll try” or “we’ll do our best.” In fact, during the election campaign in April, Brian Pallister said, “A new PC government is going to protect frontline services and the jobs of the workers who provide those services, because obviously you can’t have the services without the people providing them.”

They talked about job guarantees, said they could easily find savings in departments without cutting services, and that they understood that it was people who were necessary to provide the services. But it was clear: protecting public services was a commitment – not a “goal” or a “moving target” and Manitobans invested in them with their votes.

That the Provincial Government is now wavering on their pledge to protect our services and the people who provide them causes great concern for the public, and it certainly raises alarm bells for MGEU members whose job it is to provide those services. In a recent media story (Pallister talks about the first 100 days, softens campaign vow to protect all front-line jobs, Winnipeg Free Press, August 10,2016) reporter Nick Martin suggests Premier Brian Pallister is “softening his vows to protect front-line workers in public services, using phrases such as ‘I hope, ‘I'll do my best’ and ‘as much as possible’.”

As President of the MGEU, I hear the concerns firsthand from people in my community, or from family, and from MGEU members that they’re nervous about what may be coming. People have reason to feel disappointed about this change in direction from their government because its families and neighbours who will be negatively affected by the kinds of cuts and privatization we may soon see.

This week, you’ll notice MGEU has begun re-running a recent ad campaign with an updated message. The ad points out that if the provincial government breaks its commitment to protect public services it’ll mean cuts and privatization that take away the services you count on. Our goal is to underscore what’s at stake for people in their communities, and to strongly advocate for our members and the work they do. Before the government goes down a road of service reductions and privatization, we’re going to remind them of their promise, and we hope MGEU members in their communities will, too.

In the weeks to come, we’ll be asking members from across the province to get active and involved in the conversation about public services and the very real need to support – not cut – public services. In the meantime, we hope Manitobans will notice our award-winning ad campaign and take to heart its message about the important services MGEU members provide.