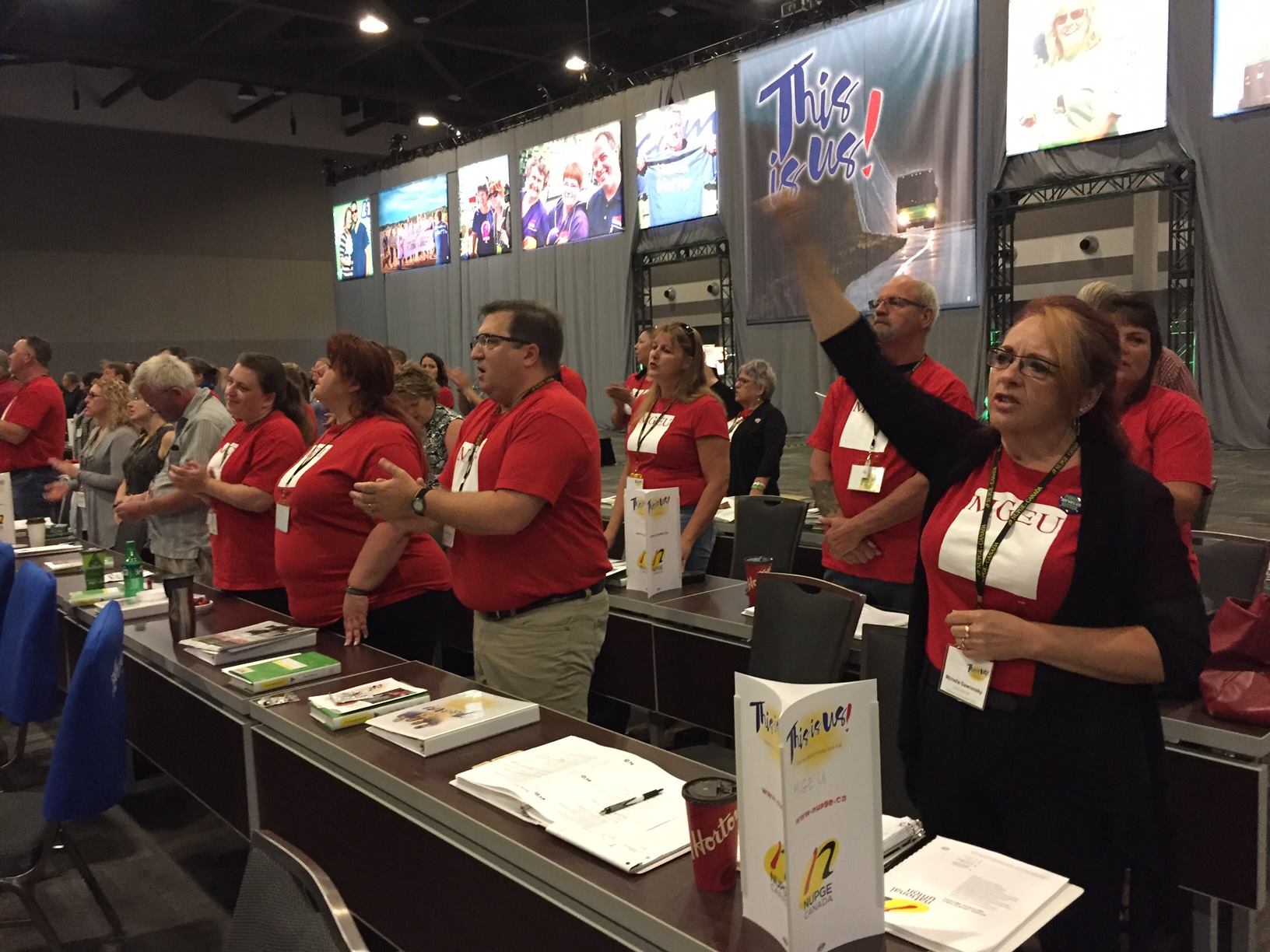 MGEU members were well-represented in their red shirts at the NUPGE Convention in Ottawa last week.

It was an absolute honour and privilege to join hundreds of brothers and sisters from across Canada last week in Ottawa for the National Union of Public and General Employees’ (NUPGE) Convention, and to celebrate NUPGE’s 40th anniversary.  The convention spanned three days which included policy development, campaign updates and the election of a new NUPGE President.

Delegates spent a considerable amount of time discussing how Canada’s network of quality public services can be strengthened. For years these services have been starved of adequate funding, forcing NUPGE members to do more with less.  On behalf of all brothers and sisters, the national union will continue to push for greater funding so public services are protected and improved in our communities.

Delegates to Convention debated what a new health accord would mean for Canadian families.  All members firmly believe that with more global health crises such as Ebola or the Zika Virus exploding across the world, and with chronic diseases such as diabetes becoming more prevalent, we have to act now to ensure Medicare is protected.  Delegates also voted to lobby for a national Pharmacare program, and endorsed a strategy to recruit, train and retain more healthcare professionals.

It was also encouraging to see the strong dialogue amongst delegates regarding mental health.  Approximately 1 in 5 Canadians will experience a mental health problem or addiction. Considering that most of us spend the majority of time at work, it was fitting for NUPGE to address this issue as a significant workplace issue.  NUPGE will lobby federal and provincial governments for the implementation of a Mental Health Strategy along with pushing for mental health training for workers in various sectors.

Delegates heard an insightful presentation and received information to assist in building and enhancing the capacity to undertake public campaigns. As MGEU members know, the MGEU’s focus in the recent past has been very much on campaigning and we have strengthened our capacity to stand up for our members and for public services.

Aside from celebrating NUPGE’s 40th anniversary, this particular convention was significant in other ways: Brother James Clancy confirmed he is stepping down from his role as NUPGE President. Larry Brown was acclaimed as NUPGE President while Elizabeth Ballermann takes on the role of Secretary-Treasurer.  Both have many years of experience with our national union and we know NUPGE remains in very capable hands.

On the final day of Convention, delegates learned that NUPGE has chosen Winnipeg as its host city for the next Convention in 2019 to help mark the 100th anniversary of the Winnipeg General Strike. Clearly, Winnipeg is a significant and appropriate choice and I know our city, province and Labour community will do a fine job in embracing and celebrating this important event.