It's About the Members 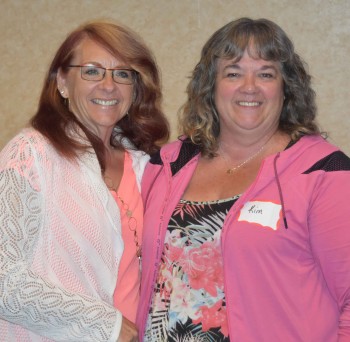 A chance to show our appreciation to activists like Kim Cady, President of HSC – Security Local 249.

I love this time of year, and not just because a beautiful Manitoba summer has arrived. In many ways, this is one of the most important and satisfying times I get to spend as MGEU President.

In late spring 2008, former president Peter Olfert started MGEU’s Activist Appreciation Tour for two reasons: to say thanks to our activists who selflessly give their time and effort to ensure their fellow co-workers are treated fairly, according to their collective agreements, and to workplace safety and health standards. Held every two years, the events have become a chance to show our appreciation for the hard work these dedicated individuals do over their two-year elected term, and to encourage them to consider running again!

Recently I began our 2016 journey across the province, sharing a meal and good conversation with activists and visiting with members in their workplaces to talk about what’s on their minds and what the union can do to make their workplace the best it can be.

This year, the events were a perfect opportunity to express to our activists just what a pivotal role they have to play, not just in their workplaces, but in our province as a whole.

As those elected to speak up on their fellow members behalf, our activists can also be a voice on issues and ideas raised by our governments ― a role now more important than ever. Over the next few years, we may need their collective strength and leadership in communities throughout Manitoba if services are threatened. Our activists may be called upon to raise their voices far and wide― with each other, their union, their elected leadership in the Legislature, and beyond.

A recent MGEU poll showed that although Manitobans voted for a change in government in 2016, they did not change their top priority: protecting and investing in public services.  We need to work collectively to hold the new government to their election promises to keep public services public and to protect those services. We need to be ready.  We need our activists.  Because we all know that when we speak with one voice, we are stronger and louder.

But for the next few days, in towns across Manitoba, I’m looking forward to simply taking some time to reflect a little bit on the good work that’s been done over the past two years ― and to salute those people who’ve gone above and beyond to protect the things we’ve collectively fought for at the bargaining table, in the workplace, and in our communities.

It’s that special time to express a huge thanks to all you, for all you do. Hats off to our activists! I hope very much you have some well-earned vacation planned to enjoy our beautiful province with family and friends.