Take the Pledge for Parity 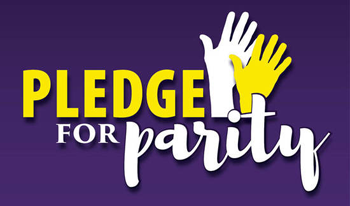 This year’s theme is Pledge for Parity, which is particularly relevant for women in the labour movement. We have fought for equality in workplaces for decades, and while we have plenty to celebrate in 2016, the progress towards gender parity has slowed in many places.

In 2014, the World Economic Forum predicted that it would take until 2095 to receive global gender parity. Today, their updated projections say the gender gap now wouldn’t close completely until about 2133!

It’s sad to think that none of us will ever see it happen in our lifetimes. That’s why it’s so important that everyone – both men and women – work towards achieving gender parity more quickly by addressing gender-balanced leadership, developing more inclusive and flexible cultures, and rooting out workplace bias.

We all know that women are paid less than men for the same work. Although the difference has narrowed since the 1970s, the average woman working full-time in the United States received only 79 % of the wages of men doing similar work. That’s a 21% gap.

Senior women are twice as likely to live in poverty as men. Women remain far more reliant on Old Age Security and the General Income Supplement than men. In 2011, almost a third of senior women’s total income came from these programs, compared to only 18% for senior men. Obviously, when you earn less over a lifetime, you are going to have less saved for your retirement.

In the labour movement, we often think about gender inequality in relation to this wage and retirement gap. But the reality is that wage parity is just one part of the inequality equation. Most women still bear the greater burden of caring for aging parents and young children in their families. As a result, they tend to work more part-time jobs and have less stable working patterns.

That is a big reason why only one out of three Canadian women qualify for Employment Insurance benefits. Although they pay into EI, many are excluded, penalized or receive lower benefits because the system does not account for these working patterns due women’s family responsibilities.

The good news is that women with unionized jobs are more likely to meet the EI criteria when they need access to benefits. Joining a union also remains the best way for a woman to receive better wages, pensions and benefits, access to promotions, and working conditions. According to the Canadian Labour Congress, unionized women in Canada make $6.65 more per hour than women working without a union. And because of unionization and higher rates of women employed in the public sector, Canadian women are closing the pension gap.

We celebrate these accomplishments, acknowledging there is much more work to be done if we are to close the parity gap. That’s one of the reasons behind the MGEU Women’s Conference, on right now in Winnipeg. Held every two years, it has given the women of the MGEU a chance to learn more about their union and each other, and explore opportunities to get involved in improving their home and work lives, their union, and their communities. The theme of the 2016 conference is “Because we are Women.”

It is my hope that each and every one of the delegates attending the conference will explore new ways that we, as individuals and as a union, can help close that gender parity gap well before 2133.

Please take the pledge for parity!