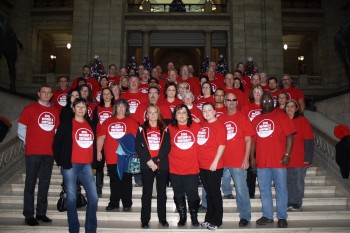 Last night, after nearly two years at the bargaining table, members of the Civil Service ratified a new five-year agreement. Not surprisingly, the result has garnered comments and questions from the membership that I’d like to address as best I can.

Negotiating on behalf of nearly 14,000 Manitobans across the province is always a complex and time-consuming process ― members elect their bargaining reps from eight different Components that include hundreds of different job classifications. While this leads to some real challenges in reaching consensus both within the Bargaining Committee itself and throughout the membership, it remains the best way to get the best deal possible for the most Civil Service members.

In other words, the union works best as a democracy. Members elect fellow members to represent their interests. The representatives put in hundreds of hours going back and forth with the employer, forwarding arguments and making tough decisions.

In the case of the Civil Service Bargaining Committee, this meant deciding to file for arbitration last spring when the employer refused to bring forward a satisfactory offer. It meant keeping up the pressure on government to return to the table throughout the summer and into the fall. When negotiations resumed in December, and a new, improved offer was on the table, it meant deciding it was time to let the membership have their say.

In the end, while a majority of voting members decided to accept the tentative agreement, with its mix of wage and benefit increases, job security, and special wage adjustments for those classifications facing specific recruitment and retention issues, others disagreed. Some maintain that in the short term, members would have gained more through a binding arbitrated settlement. And it’s impossible to know if they’re right. But what we do know is that when we go to arbitration, there are no guarantees.

This is democracy in action. The Bargaining Committee explained the options to the membership and let the majority decide ― accept the tentative agreement or proceed to arbitration.

Some have asked why the union did not release the actual number of members who voted, or exactly how many voted for acceptance. There are a number of reasons why many Bargaining Committees don’t release detailed voting numbers, even when the results show strength and unity.

Not releasing numbers for any vote is a way to preserve the entire union’s long-term bargaining strength. Often negotiations at various MGEU bargaining tables are connected. An employer may choose to weaken or strengthen its offer at one bargaining table based on the strength of a related group’s ratification vote result. Not releasing the specific numbers, regardless of how strong they are, avoids these pitfalls.

In the case of the Civil Service, members have decided to ratify, and we respect that decision.

Ultimately, the entire negotiating process, with its debates and decisions, is all about respect.

Respect for the incredibly hard work of the Civil Service Bargaining Committee who stepped up to immerse themselves in the task, made the tough decisions, and never wavered in their efforts to listen, learn and get the best deal possible.

Respect for your jobs ― for the work you do and the vital role you play in keeping Manitoba going and growing.

And respect for each other. Our effectiveness as a union, and as union members, flows from a solid sense of democracy and solidarity. Both in the short term, and the long, it’s what keeps us strong.