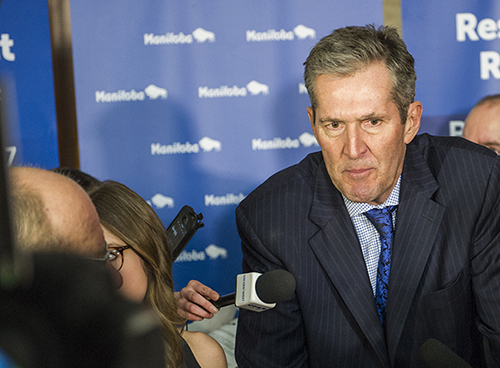 When the Pallister government tabled its budget last week they were keen to highlight how their plan would cut income taxes for individuals and businesses and reduce the deficit, while providing, what they called, “record spending” on services in key areas.

That last point is hard to digest – particularly since the budget showed very little in the way of investments in the civil service, where the government continues their commitment to cut 1,200 jobs that support Manitobans.

Let’s move past the rhetoric and take a closer look at Budget 2018.

In a small province like Manitoba, it’s very difficult to reduce income taxes and reduce a deficit without significant cuts to services. To do that a government would need other significant sources of revenue.

Enter two very important injections of much-needed money the government will receive this year: a new carbon tax and an increase in transfer payments from the federal government.

The Province expects to take in an extra $143 million in carbon tax revenues in the coming year (and $248 million annually after that), while equalization payments from Ottawa are expected to climb $301 million higher this year.

That’s a lot of new money! One might think that these financial windfalls would allow the government to halt its austerity agenda with more key investments in public services and the people who provide them, right?

Well actually, no, that’s not in the plan. Health and education are receiving less than one percent increases in their budgets. That won’t even cover the cost of inflation, so it’s essentially a cut in those two areas.

With budget lines cut or flat, the ongoing impact on long-term care and home care will be significant. We all know that as our population ages, more services are needed, not less. These decisions will become very costly as the cuts add up and result in lower quality care to seniors.

Meanwhile operating grants for colleges and universities are being cut by millions of dollars, but they still need to maintain the service so each institution is now looking at tuition hikes. Assiniboine Community College, for instance, says they may have to raise tuition fees by up to $250 per program. Brandon University announced it may raise tuition by as much as 6.6 per cent.

In this budget, infrastructure spending will also be reduced by $152 million. That’s a hefty cut that makes no sense at all when you consider that Manitoba’s infrastructure deficit currently exceeds $11 billion (a staggering $10,000 per Manitoban!) according to the Association of Manitoba Municipalities. Looking at our crumbling infrastructure and the number of jobs that fixing it would create, an increase over last year would have made more sense, yet this government chose to cut.

It’s more than a bit ironic that the government titled this year’s budget document “Keeping Our Promises,” while the Premier called it the “best budget ever.” Such bold statements should be reserved for budgets that provide key investments in public services and infrastructure, not austerity budgets.

The record levels of revenue taken in by the government provided the Premier with the opportunity to keep his election promise to protect and invest in public services. Sadly, he ignored that opportunity and the result will be continued cuts to public services this year.