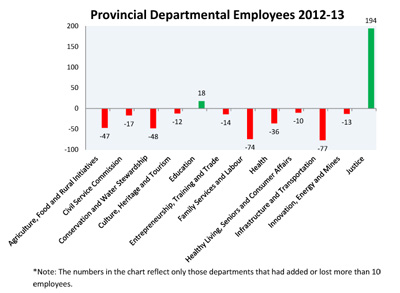 The latest report from The Civil Service Commission confirms what the MGEU and its members have been saying for quite a while now: the total number of provincial employees has dropped.

Last year, 167 jobs were cut (mainly by eliminating vacant positions) from government departments. This excludes the roughly 130 positions outsourced through the privatization of the Property Registry.

MGEU members are doing more with less; increasingly, the services Manitobans depend upon will be impacted. Meanwhile, Manitoba’s population is growing every year, adding to the workloads in many key departments.

Family Services, for instance, saw one of the biggest staffing drops with the loss of 74 jobs. These cuts are taking place despite the fact that nearly 10,000 children are in Provincial care (the highest number per capita of any province).

Road repairs and snow clearing will also feel the brunt of the cuts as 77 jobs were cut from the Infrastructure and Transportation Department, although the Province has indicated a huge investment in infrastructure projects.

The department of Conservation and Water Stewardship saw 48 positions cut, leaving fewer people to keep our campgrounds clean and safe, and to manage our natural areas.

These departmental cuts are consistent with the message the MGEU has received from members this past year – the same message which kick-started the union’s Elephant Talk campaign this spring.

Justice was one of the few departments with a staffing increase. Considering the ballooning inmate population and the backlog in the court system, these increases are much needed.

Overall, this trend is not a good sign for most Manitobans who said maintaining or improving public services was their top priority in a January 2013 poll. The 300 jobs that have been eliminated in the last year bring the government halfway to their goal of cutting 600 jobs.  And while it’s rather simple to quantify how many positions have been lost and where, the more difficult task is to determine just how that will affect the quality of public services in this province.